It’s been a while. Let’s be cherishable with words and say that I haven’t been very active on my blog since april.
I hope you’re all doing well, I have quite the amount of e-mails (close to 1000) from respective blogs so I assume that you’re alive at the very least which, for me, is comforting enough 🙂

I’ve been focusing on practicing with the guitar for days on end. A while ago I was united with a beautiful classical guitar, here’s a picture of her: 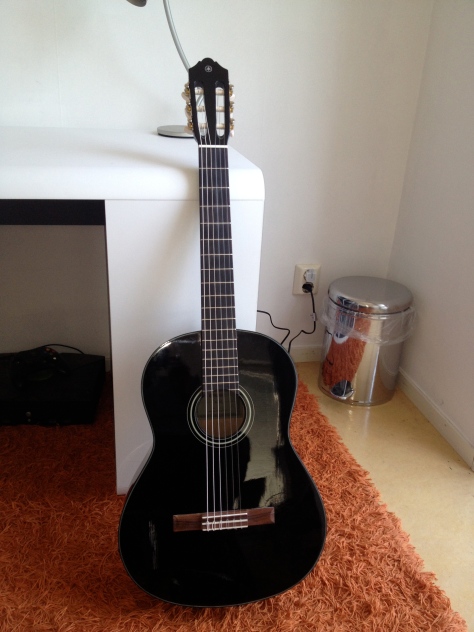 Much like the steel-stringed guitar I gave her a name; Ariadne.
I’ve been fully occupied with her and we get along very well; we create music together and we both find pleasure in doing so. We’re improving faster than I thought we would but not enough to post a video on it yet, but at some point we will.

So if you have any problems with me being inactive on the blog, please blame her 🙂

On to the project then.

When I was eight my older brother had discovered his talent and passion for drawing and painting. I was slightly envious and tried my best to imitate that passion with my own drawings but I couldn’t draw a stickman to save my life.
It wasn’t until the age of eleven (after demanding it for a full year) that I was given a diary by my mother.
I started writing in a weird and ambiguous way, a year later I learned that it was similar to poetry or perhaps even poetry and that’s how it all started.
I’ve actually kept that diary to read and have a laugh from time to time, I was quite dramatic with my descriptions and analogies as a young boy 🙂
Here’s a picture of it by the way and on it there’s a picture of me when I was eight.

Anyway, before I was given the diary, as I tried drawing. Dad eventually taught me how to draw a simplistic flower that looked like this:

Now I’m not sure I’ve mentioned this but earlier this year (middle of mars to be more precise) I moved from my old apartment placed far from the university, took me about an hour with public transportation and too far for a bike, to a place closer and within biking-distance.

So of course I had to take down last summer’s project. For those who just recently joined my little symposium the project looked like this:

It consists of 128, I think, CD-sized pappers with half a poem written on them and the few larger poems were split in threes. It took 65 poems and a total of 70 hours spread across four weeks in order to get the shapes right, finish the poems and so on.
It represents a couple holding each other, I took this picture laying on the floor.

I had to take it down before moving out, I wasn’t sure whether or not the next person to move in was going to appreciate having it but I chose not to risk it.

My new appartement is much comfier in many ways, my friends are actually within an acceptable distance now and instead of one window there are four, along with a french balcony (which doesn’t really make any sense, I mean I tried talking to it in french and it doesn’t answer at all. As far as I’m concerned it’s a door-sized window) and I know live on the fourth or fifth floor depending how you see it with..uhm..some kind of a view at least.

Here too I found the white walls to be slightly (very) boring, but I didn’t really have time to put up last year’s project due to the exams, NaPoWriMo and the guitar. I also didn’t want to do it because I didn’t realise it actually was a picture of me and my ex-girlfriend until I finished it, it depicts the same evening as one of the very first poems I posted on this blog, “A love story“.
I guess at some point you have to move on so I chose to leave it behind and do something new.

During a resent (re-)exam in microbiology, just before the break for summer, the flower dad had taught me to draw appeared in my head and I figured I’d use that as an inspiration for this years project for something to put infront of my desk.
If I remember correctly QueridaJ, a genius of a poetess, asked me to post should I do anything similar to what I did last year and I, of course, am happy to do so 🙂

Well then, using the flower dad taught me to draw I drew the flower in pieces that I could cut from a paper and I also tried to increase the size of the flower, I ended up with this at first:

I do agree that it’s not very charming so aside from the two layers of petals I then added a third to the flower and ended up with something a bit better:

That is when I also decided to call it “Apheleia’s flower”. Of course there are reasons, three of them:

2. Secondly, Apheleia is the spirit of simplicity from greek mythology, and that flower really is the easiest one there is to draw, even I can draw it!

2. The third reason is a bit farfetched. If you pronounce the name, the way I do, it sometimes sounds slightly like “Aphilía” and “Aphilía” sounds like a derivation of “Filía”, which is the name of my future daughter should I be lucky enough. Filía is greek for friendship, amity and companionship. Of course the name of the daughter will be up for debate with the future Love but I do intend to win that argument 😀

I then proceded with drawing the shape of the first layer of petals on a papers ment for calculating so don’t tell the professors at my university if you know any of them, I’m not sure they’ll appreciate it.

To get a good drawing of the other shapes I had to sacrifice quite a large piece of paper:

Because I’m terrible at drawing my first attempt to draw the shapes of the third layer of petals went…uhm…bad.
You can see that the proportions between the two minor pieces are way off, so out of general frustration I stopped working on it for a while.

I tried again the day after by making the second layer of petals tilt to the right and was more satisfied with it:

I cut out the pieces and placed them on the wall to see how it was shaping and here’s a picture: 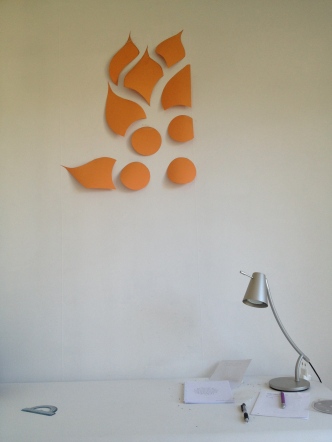 But I was a bit worried that I had failed to get the shapes right so I started over in order to be sure, putting up one layer of petals at the time using circles from last year’s project.
It looked like this: 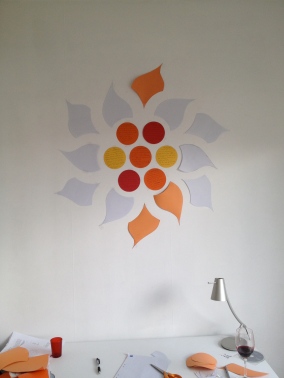 It turned out better than I had imagined. At this stage I hadn’t made up my mind on what colours to use, I ended up just going to the store and deciding on a whim.

I used poems from the “First Love”-series I wrote in april. It was a bit tricky to get the angle right as I wrote the poems so they could be read normally without having to tilt head sideways should you feel like reading them.
Luckily I only had to use part 1 to 14 making it a “happy” flower, anyone who has read beyond part 14 will agree that the story doesn’t exactly take a cheerful turn.
Here’s a picture of what the process looked like as I wrote the poems: 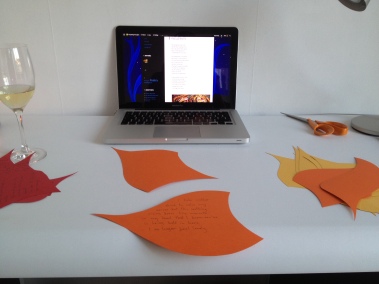 As you can see, I had to place the next piece to write on next to each other in order to get it right. And no, it wasn’t tricky because of the wine. The process wasn’t quite as terrible as last year, part of the reason is that the flower consists of only 31 pieces compared to the 128 pieces it required last time.

I started putting up the flower last night and it’s always a bliss to watch your work come to life bit by bit, I won’t show all the pictures but this is halfway through it:

I finished it last night but took the following pictures this morning instead to get better and more natural lighting.

Here’s a close up, if you zoom in  on the orange part and succeed in reading my handwriting you should be able to distinguish part 10 from the series, the one about the first kiss. 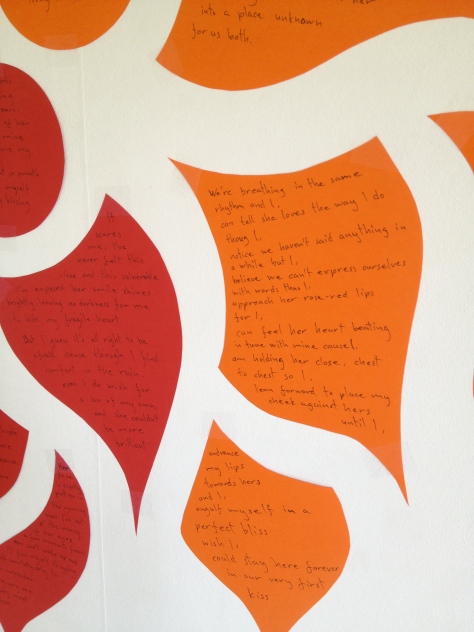 This was the final result at first;

It looks a bit like a sun but fortunately more like a flower so I can’t say I’m not satisfied. I love the results but it was lacking a bit of “Fidèle”-character to it so I, of course, took out an essential piece to somehow make it more complete, it now is perfect in every way I want it to be.

So ladies and gentlemen,
my dearest and most precious of remote friends.
This is Apheleia’s flower:

As always, I thank you for reading my blog
and I wish you a lovely summer 🙂